WARREN, PA, October 20, 2020 – The USDA Forest Service has noticed an increase in wildfires across the Allegheny National Forest (ANF) due to recreational activities.

The Minister Creek wildfire located along the narrow rocky ridge west of the Minister Creek campground near Sheffield was ignited by an abandoned campfire on Thursday October 15. While the fire is contained to one acre, it continues to burn deep in the duff, creating concerns of creeping and smoldering fire beneath the forest floor.

Paul Clement, Assistant Fire Management Officer with the Forest Service, noted that current weather patterns have left the forest more dry than usual. “Normally we have more humid conditions this time of year, which lowers the potential for wildfire to burn vertically downward. However, the lack of rain has dried out the mossy and predominantly humus areas (organic matter, leaf litter, and duff), contributing to the fire behavior burning into deep pockets of dried organic matter,” Clement said.

Areas like these can be stubborn to extinguish. Clement stated that the fire can burn beneath leaf litter and other debris, igniting root systems of dead trees, burning out pockets of dried materials and creating additional hazards to firefighting resources. “A fire can pop up outside of the containment lines from underground and carry the fire into more fuel,” Clement said.

Forest Service Fire Management Officer Craig Kostrzewski reported that fire personnel are also attending to a second fire near Sheffield, which was reported on October 18. “We appreciate the combined suppression response with our local, county, and state partners. Combined efforts from local volunteer fire departments and Forest fire resources from the Minister Creek fire were able to quickly contain this fire to three acres,” he said. This fire is still under investigation.  He added that while the ANF has received some precipitation, it is not enough to impact the fire danger.

The ANF is seeing a welcomed increase in recreational visitors but reminds users to observe fire safe practices and Leave No Trace Principles. According to Kostrzewski, most wildfires on the ANF are human caused. “This past year, the leading causes of wildfire on the Forest were abandoned campfires and debris burning.”

He stressed that Forest visitors should know before they go: check the fire danger for the area you plan to visit; verify if there are current restrictions in place; build fires within contained fire rings on top of mineral soil and not on leaf litter, duff or organic matter; never leave the fire unattended; drown, stir and feel your campfire coals to ensure that the fire is dead out and cold to the touch.

For more information on the Leave No Trace Principles go to www.lnt.org.

USDA is an equal opportunity provider, employer, and lender.

Caption #1: (Photo provided by the USDA Forest Service) Wildfire smolders deep in a crevice along the trail in the Minister Creek Trail area of the Allegheny National Forest.  Drier than normal weather conditions and moderate fire danger have created hazardous conditions that risk wildfire from abandoned campfires and other recreational activities. 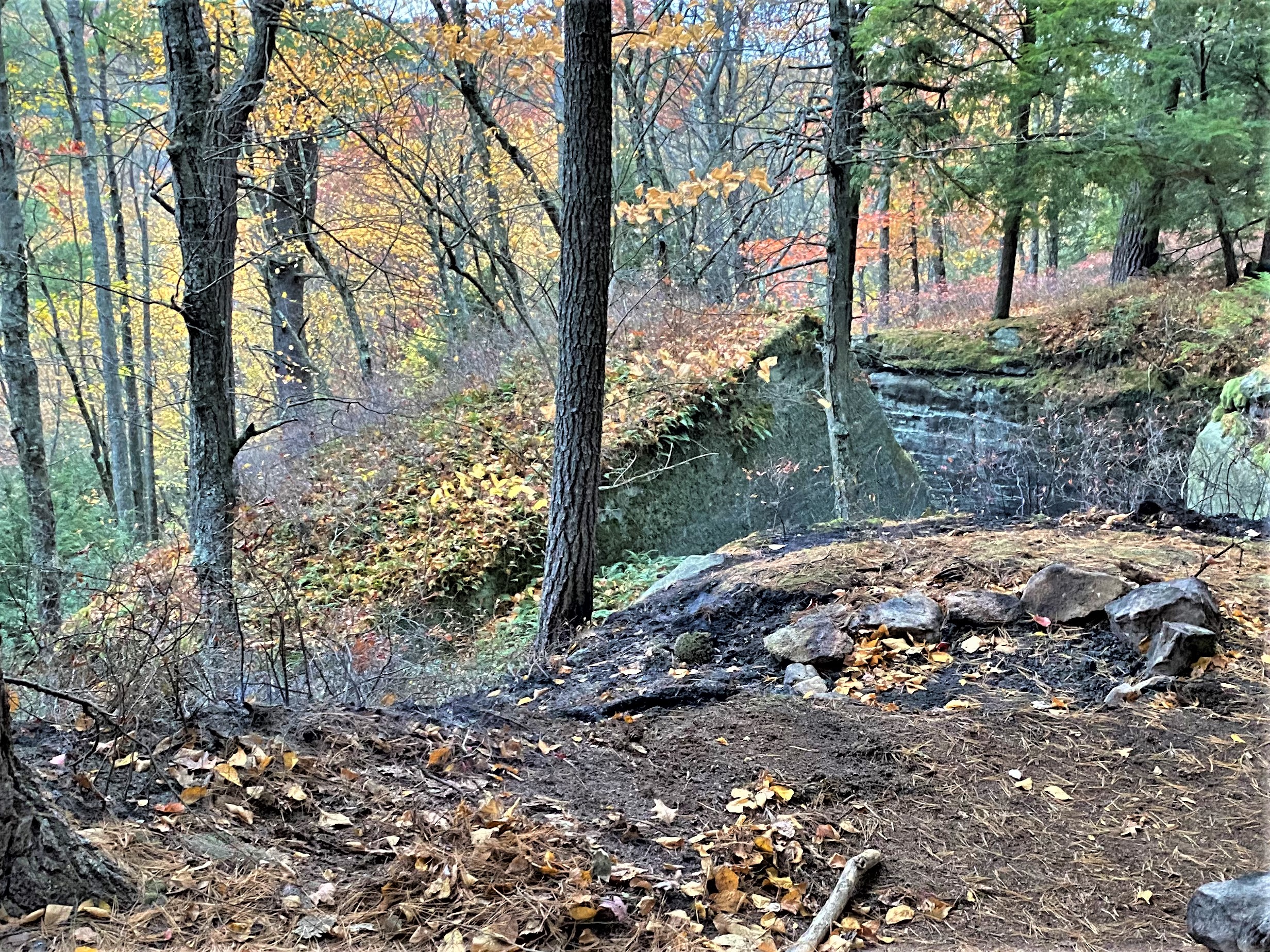 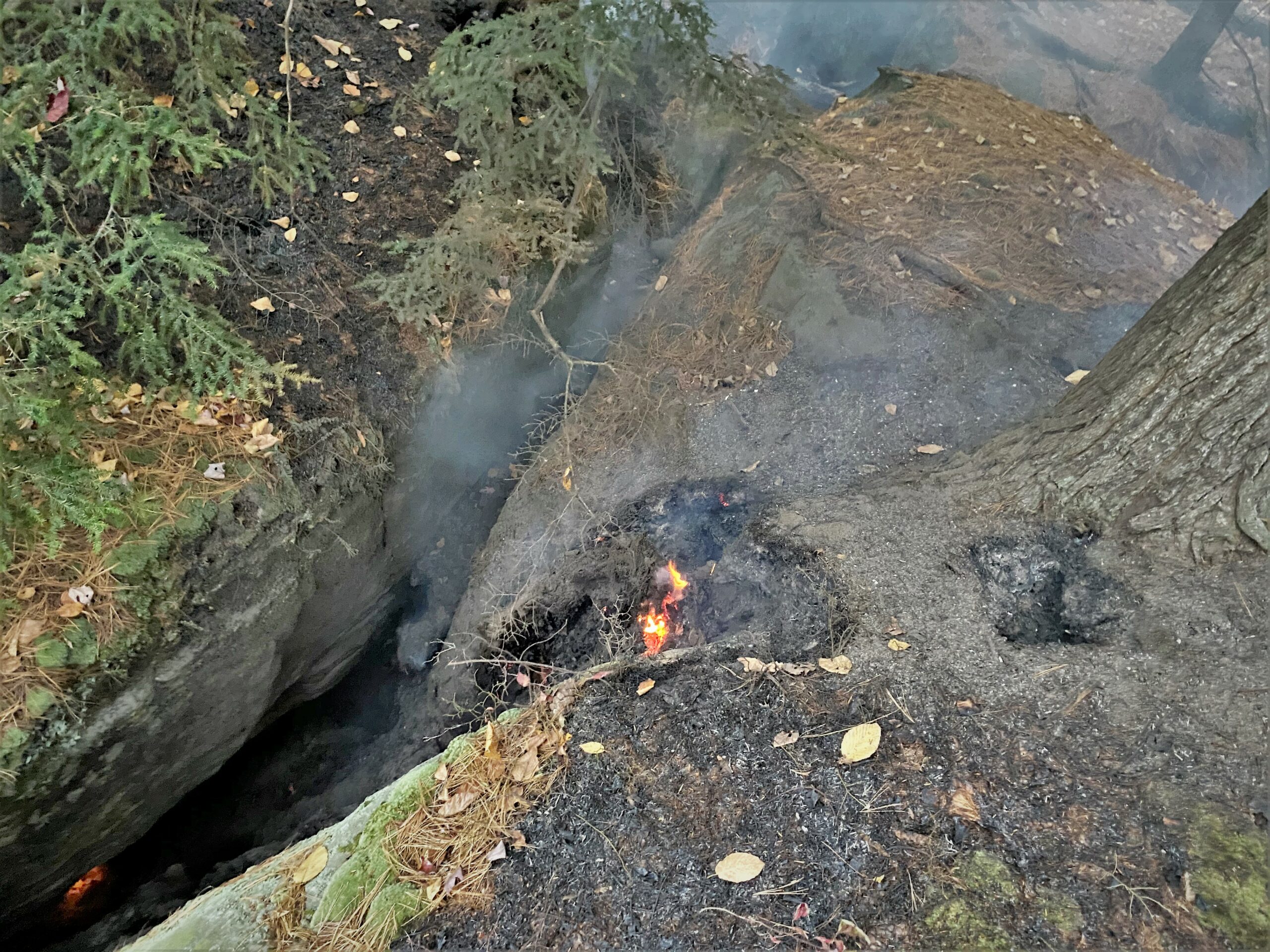